Above is Webster's definition of MONORAIL, but what about our definition? First of all, who cares? Well, believe it or not, there is a good reason to care if you are pro-monorail.

People often make the assumption that any elevated rail or peoplemover is a monorail. This leads to issues attributable to other types of transit systems being attributed to monorails. Therefore, we've come up with an official TMS definition:

MO*NO*RAIL n. 1. A single rail serving as a track for passenger or freight vehicles. In most cases rail is elevated, but monorails can also run at grade, below grade or in subway tunnels. Vehicles are either suspended from or straddle a narrow guideway. Monorail vehicles are WIDER than the guideway that supports them.

But don't just take our word on it, visit the Wikipedia Monorail page. 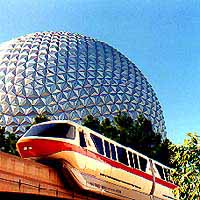 No doubt about it, the Disney monorails in Florida and in California fit the criteria. Even though there are five running surfaces on the beam, the track is singular in nature. The trains are obviously wider than the guideway...it's a monorail! 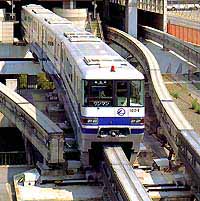 An Osaka Monorail train is seen here running through one of many switches. Again, wide train with a narrow guideway = monorail. 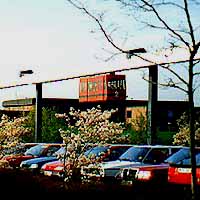 Dortmund University's H-Bahn is a great example of just how narrow a monorail beam can be. Siemens developed it and is constructing a similar system at Dusseldorf International Airport. 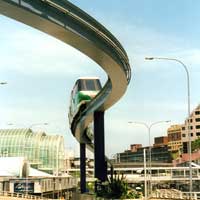 This was Sydney Metro Monorail in Australia. Narrow singular (mono) beam, with a train wider than guideway. 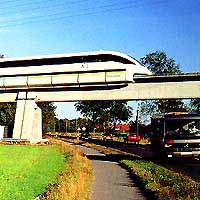 This is a Maglev Monorail. It shares the same attributes of conventional monorails in that the train wraps around the track. However, propulsion and lift are provided by powerful magnets. See our Maglev Monorail Page for further information. 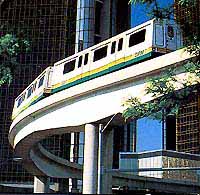 The Detroit People Mover (above) and the Vancouver Skytrain are often referred to as monorails. they actually are elevated light rail systems. They run on conventional steel dual rails on a massive wide beam. It's basically a modern version of the old elevated trains of Chicago and New York. 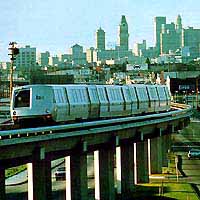 This is an aerial section of BART in the San Francisco Bay Area. To the untrained eye, it may look like a monorail, but it's conventional rail. 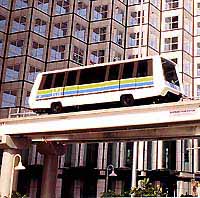 Several manufacturers build people movers like this one (Miami) that are essentially automated buses. Many can be found at airports. In comparison to monorails, the tracks are gigantic. 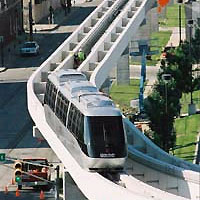 This is SDI's Clarian People Mover in Indianapolis. While the beams look narrow and the train looks identical to the monorail in Sydney, there are clearly two individual and separate tracks per direction. Dual does not mean mono! 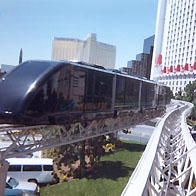 This is a cable car, designed primarily for shuttling passengers between a few of stations (usually two). Las Vegas has several cable-propelled shuttle systems like this one, often mistakenly referred to as monorail.